Today, I’ll finish up this little discussion about riding the school bus – especially as I remember it when I grew up.

If you were lucky, you had a “cool” bus driver. I don’t know that I was that fortunate all of my school years, but in my last years in High School, “Jim” was our driver. He played KJR (our great local rock and roll station) nice and loud so we could rock out the latest tunes (remember – we didn’t have the option of our own music in our ears). He also drove aggressively. This is not to say he was reckless or dangerous, - he just punched it here and there, took corners kind of fast, you know – just made it a bit exciting for us kids. Of course he looked the part – long hair, cool sunglasses, smoked. Anyway – he was a great!

For the record – when I was in school, almost all the bus drivers were guys. There was one woman driver, and that was “weird” back then.

One thing that was always a big fear was if you missed the bus. My mom had a part time job by the now and so we didn’t really have a backup plan. If I missed the bus, I had to high-tail it to school. That was a mile and a half to Junior High, and three miles to High School. Skipping class wasn’t really an option, so I did my best to get there asap. Missing the bus after school wasn’t as big of a deal. I had to call mom from school to let her know I would be late – from, you know, a phone that was connected to the wall at the school – but I still had to walk home. It only took a few times of doing this in bad weather to help convince me to be a little more careful to make sure I caught the bus after school.

So – to wrap this all up – I know that plenty of kids still ride school buses. Probably the biggest differences today is that they can totally disconnect from their surroundings from the minute they get to the b

us stop until they get to school using personal electronics… be it a phone, mp3 player, hand held game, PDA, etc. I would also hazard a guess that while there are still the many different cliques and social levels that kids either fall into or try to attain, the advent of video surveillance on the buses has probably reduced the fears that we had of the consequences of sitting by the “other” ones.

The public school buses are a great and safe thing for kids. They’re also a great memory that helped to define my childhood, and probably plenty of yours, too. What memories do you have about riding the bus? (And for those who youngin's who might think this is what our buses looked like - we're not that old!)

Thoughtfully opined by Blast from the Past at 3:20 PM 2 comments:

There were many anxieties associated with riding the school bus as a kid. One just had to do with waiting at the bus stop. You didn’t want to get there so early that you looked like an eager beaver, but you also didn’t want to run up last minute – especially if you made the bus have to wait for you.

While you stood waiting for the bus, you had to decide where you were going to stand, who you were going to stand with, and what you would do while standing there. Remember – these were the ‘70s – you couldn’t bide your time with some hand held device. There was nothing to play, listen to, read or look at. And - you couldn’t talk to anyone who wasn’t within earshot of you. Nope – the options were pretty limited – it was you and the people around you.

Winter was the worst ‘cause you had to stand out there in the dark just hoping that you didn’t freeze, get beat up or be made fun of; pray that you didn’t forget you lunch, homework or that you had a test today, and all the while try to look like you were “cool” and “didn’t care”. I can vividly remember the sights, sounds and my feelings of those mornings… shifting around to keep warm, wishing I was still in bed, dreading some unavoidable event at school that day.

It’s kind of a sad commentary on the times we live in now when I drive by bus stops on my way to work in the morning and I see moms parked in cars across the streets – watching their kids until they actually get onto the bus. Some even keep their kids in their cars until the bus arrives. That would’ve never happened when I grew up, but if it did, you can bet it would’ve been fodder for relentless teasing and bullying once you were out of the protective gaze of mom.

At one time during my high school years, my bus ran a route that would go by my house on our back street, and then eventually come up our front street where my stop was. This made it easy to get all ready to go, catch a few zzz’s and still get up and out to the stop just in time to catch the bus. That was sweet!

I have to add one thing to my last post about riding the bus. Peer pressure is an incredible thing! I’ll never forget when I was in 9th grade and my “little brother” started riding the bus since he was now in 7th grade, now. One of the first mornings of the year, we get on the bus and it’s really full. There were only a couple of places left to sit, and I found a pair of open seats on one side. I sat down and immediately prevented my brother from sitting by me. There was no way I was going to be seen sitting together – my classmates would’ve teased me to no end. He ended up standing the entire time, all because I wanted to look cool in front of my peers. Kind of scary, when you think about it…

Thoughtfully opined by Blast from the Past at 1:22 PM 1 comment:

For many kids, riding the bu

s was an integral part of the school experience. I lived within easy walking distance of my Grade School, but was bussed to both Junior High (we didn’t have “Middle Schools” in the ‘70s) and High School.

There is a whole mindset and culture that exists for those who are subjected to riding school busses. This discussion will undoubtedly span a couple of entries, so for today, I will address the different personalities and the roles they played on the buses.

Stoners: Yeah, you know who you were. There was only one place for you - the back of the bus. Since most bus drivers tried be cool and played the local rock and roll stations you, were in your element. You’d get on the bus with that “certain sweet smell” emanating from you and would head straight to the last rows – passing by the rest of us with your unwavering glassy-eyed gazes and plop down. Your ride was filled a few customs. You’d take out your pipe and admire it, to the horror of us who caught a glimpse of it. You’d let out a few expletives here and there to scare us all, and you’d talk in low hushed tones among yourselves, only to shoot some sly looks and laugh under your breath with each other.

Geeks. Just like you would think – glasses; pocket protectors; nice neat clothes; belongings on lap and held close; sit as close to the front as possible for safety. If a few of them were together, they might share about a latest chess conquest or exciting science experiment. If they were alone, they sat in complete fear and just prayed that they would get to their destination without getting beat up or made fun of.

Jocks: Sat together; wore their letterman jackets ALL the time; sat next to and flirted with any pretty girls; talked loudly about their latest game, the party last night, or how much they benched in the weight room. They passed the time by punching the nearest unsuspecting kid. Fortunately, during their respective seasons, they didn’t rid et he bus much.

Cheerleaders: Sat near the jocks; did their make-up all the way to and from school; dressed impeccably and were the object of every guys quick peeks.

Te Rest Of Us: We were band members; serious students; good kids; and a whole lot of other things. We just tried to get on the bus and ride without getting into any sort of a situation. We did our darndest to look cool, fit in, and just get by without making any mistakes or looking stupid.

We all had our own way of “existing” on the bus. More on this subject later.

Thoughtfully opined by Blast from the Past at 1:07 AM 5 comments:

Back when SNL was good...

I am amazed how the show is so not good anymore. I mean SO not good. I would venture a guess, from what I’ve watched, 90% of it is crude and inappropriate… and not funny.

Back then, SNL was funny. Those of us who grew up watching it remember all the great skits that came out of those shows. And – in contrast to the shows today – it was 90% clean. And what was “dirty” was SO tame. The original cast was extremely funny, extremely talented and very fortunate to be at the right place at the right time.

Some of the great ones I remember: Killer Bees, Cheesburger, Cheesburger, Rosanne Rosannadanna, Coneheads, Star Wars – give me those Star Wars, Landshark, Baba Wawa, Father Guido Sarducci, so many more…

What were your favorite skits?

Thoughtfully opined by Blast from the Past at 12:37 AM 2 comments: 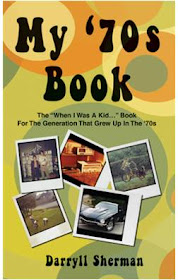